We await your arrival and look forward to having you join our learning community at AISN.

When you tell people that you are moving to Mauritania, their likely response will be, “Where?” or “I’ve always wanted to visit Mauritius.” In fact, when mailing boxes to Mauritania it is important to include West Africa after the country to ensure that your box does not end up in the Indian Ocean! 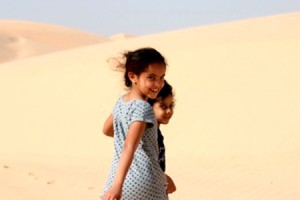 Mauritania has a total population of about 3.5 million people consisting of 4 main ethnic groups: Moors (white and black from Arab origins), Pulaar, Wolof, and Soninke (black from African origins). Mauritania is a Muslim country. People dress in both the traditional Muslim and western clothes.  Foreigners can typically wear their normal western clothing, yet it is good to keep in mind that it is a conservative society when choosing attire to wear.

The physical conditions of Mauritania are extreme:  the sun, the desert, the heat, the rain, the wind…. but they all come together to create an incredible landscape.  The climate is hot during the summer, July-October, and mild November-June. The rainy season ranges from July – October.  Every year tourists come from Europe to visit Mauritania for the beauty of its desert, the bird parks and ancient cities.

The capital city, Nouakchott, is on the coast of the Atlantic Ocean . The population in Nouakchott is a real melting pot. Many people have settled in Mauritania as result of civil unrest in their countries. You’ll meet people from Sierra Leone, Liberia, Ivory Coast, Ghana, Mali and Senegal to name a few. 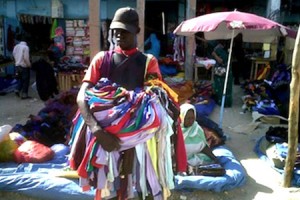 In Nouakchott, cars share the road with donkey carts and wandering goats and sheep.   People spend their weekends playing on the endless beaches or exploring the never-ending dunes of golden sand.  Inside Nouakchott, the city center is active with entertaining market activities going on, mainly in the early hours of the day.

The Cinquième district is an even more original market, where everything from fresh produce, plastic shoes, yard goods, and cooking pots to porcupine quills, rock salt, and handicrafts can be seen or bought. 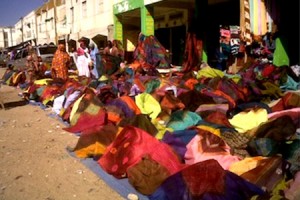 There are also big supermarkets, where each year their selection increases with some markets importing European and American products.

The Moroccan Mosque market remains the best place to shop for fresh fruits and vegetables. A variety of cheap produce grown in Mauritania and Morocco is available. 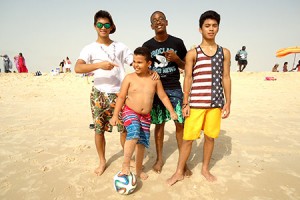 The waters off of Mauritania are some of the most plentiful fishing grounds on the planet. The fish market is the place to go for the day’s catch.  The best time to visit, whether to buy fish or just to watch the activity, is an hour before sundown when the fishing pirogues are returning.

There are opportunities for travel out of Nouakchott, although the price of airfare is not always cheap. There are daily planes going and coming from Europe and other African countries. Popular destinations for teachers and foreign families include Senegal, Morocco and the Canary Islands.

Akjoujt – About 3 hours from Nouakchott, Akjoujt is the site of a former copper mining industry.

Atar – 4 hours from Akjoujt, Atarwas one of the ancient capitals of the Almoravid Kingdom and a caravan base for trans-Saharan salt trade.

Chinguetti  – About 120 km east of Ata this is the seventh holy city of Islam. Some of its houses and mosques date back to the 13th century.

Nouadhibou – A fishing and commercial port as well as the terminus of the railroad from the iron mines.Located north of Nouakchott.

Kiffa  – An interesting change of scenery 600 km east of Nouakchott. With oases and escarpments, Kiffa is an important regional trading center.

Aioun – About 3 hours east of Kiffa where you’ll findhouses made of beautiful blocks of local stone.  The area to the south has interesting formations reminiscent of the American southwest.

Keur-Massene – A large hunting and fishing encampment located in the delta area of the Senegal River near a bird refuge with 160,000 hectares of land.

Banc d’Arguin – A wild area of birds along the sea in unusually beautiful settings, plus big sea turtles and other huge fish swimming around the rocks at the foot of cliffs.

Bird Watching and Natural Observation: Compact binoculars are reasonably priced in the States, but nearly impossible to find in Mauritania. Good books on natural history are hard to come by in Mauritania, so be sure to bring a few along with you. Birds of Africa andMammals of Africa are two great selections.

Leatherwork: Leatherwork is a popular hobby in Mauritania. It is easy to get your hands on more traditional tools, but if you are trying leatherwork for the first time, they can be more difficult to use. When in doubt, buy and bring a leather sewing tool from the states.

Art (Painting, drawing, sculpting): Art supplies can be expensive and hard to find, so we recommend bringing your own and then supplementing with the abundance of local, natural materials available in the area.

Music: Musical instruments are a great way to spend time while in Mauritania. Be sure to pack extra reeds, strings or other necessary pieces. NOTE: Please consider the potential damage the climate may have on instruments before bringing them along.

Insect Collecting: West Africa is home to an array of exciting insects that are easy to collect and preserve. Any field guide book will give you all the details on how to start a collection.

Designing and Making Clothes: You’ll love the variety of high quality fabric available in Mauritania. There are sure to be colors and patterns like you’ve never seen before.

Camping:  There are many wonderful places to camp in Mauritania and the surrounding countries.  You may want to consider bringing an ultra-light, portable tent, mosquito net, and a plastic tarp.

Stargazing: With minimal city night light in Mauritania, you’ll have the chance for some spectacular stargazing. Located closer to the equator than most parts of North America, stars and constellations are a vivid part of the night life here.